There are many tasks in our daily life wherein the sequence of our data matters. For example, in a sentence, all the words need to follow a particular sequence. If the words are not in a sequence then the sentence will not have any meaning. Another example is time-series data, where the time defines whether an event occurs. There are many more cases where the sequence of the information has a significant role in determining the output. To solve such kinds of tasks, we need a network that can remember the prior data to give a reasonable output. This is where Recurrent Neural Networks come into play.

This can be a task of classifying tweet or movie reviews into positive or negative sentiment. Consider the example given below, here in our input, we would be having a tweet that would be of varying length and our model would need to understand the entire sentence in order to accurately classify that sentence.

Image captioning is a process of generating descriptive text summarizing the content present in the image. Here, the input will be an image and the output would be a sentence of varying lengths. Have a look at the examples shown below. 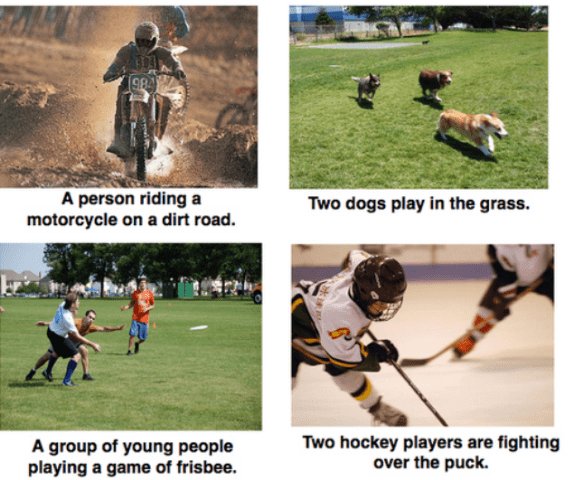 So we can use Recurrent Neural Networks to map inputs to outputs having different types and lengths. Now that we have seen some of their applications, let us understand more about recurrent neural networks.

What are Recurrent Neural Networks?

Let us say that we need to create a model which will predict the next word in a sentence. Let us understand what would happen if we used a Multi-Layered Perceptron to accomplish this task. In an MLP we have an input layer, a hidden layer, and an output layer. 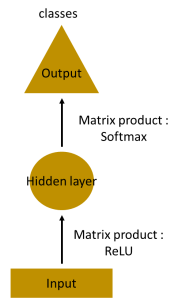 Let us see what will happen if we have a deeper network. In the below network, we can see that there are multiple hidden layers present. So here, the input layer receives, the input, then in the first hidden layer, activations are applied and then these activations are sent to the next hidden layer until the output is produced. As every hidden layer has its own weights, they act independently. Now if we need to detect relationships between successive inputs then we would need to apply inputs to the hidden layers. 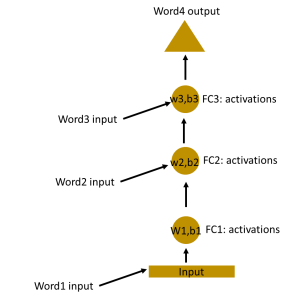 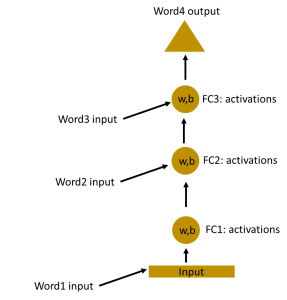 Understanding a Recurrent Neuron in Detail

Let us get a better understanding of the recurrent neural network by performing a simple task. Let us take the word "Hello". We will provide the RNN model with the first 4 letters which are h,e,l,l, and the RNN will predict the last letter which is 'o'. In this case our vocabulary is just {h,e,l,o}. 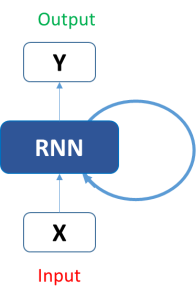 Let us see how RNN will predict the fifth letter that is 'o'. In the above figure, we can see that the blue RNN block uses a recurrence formula to the input vector and also to its previous state. In our sample case, the first letter is 'h' and it has nothing before it, so let's move on to the next letter which is 'e'. In this case, a recurrence formula is applied to the letter 'e' and to the previous letter which is 'h'. This is called a time step. So if at time t, the input is 'e' and at time t-1, the input is 'h', then the recurrence formula will be applied to both 'e' and 'h'. The formula for the current state is as follows:

In the above formula ht is the new state, ht-1 is the previous state and xt is the current input. Now we have a state of the previous input instead of the input itself. This is because the input neuron would have applied the transformations on the previous input. In our sample case, we only have 4 inputs that we need to feed to the network. So, during the recurrence formula, the same function and the same weights are applied to the network at each time step. Let us assume that the activation function is tanh, the weight of the RNN cell is Whh and the weight of the input neuron is Wxh. From this, we can see the recurrence relation below.

The RNN cell in this case is just taking the immediately previous state into consideration. When the final state is calculated the output can be produced.

The output can be calculated by the below formula:

In this project, we will be making a sentiment classifier for the IMDB movie reviews dataset. We would be using the IMDB dataset from keras library.

Firstly let us import the dataset

We have now imported the IMDB review dataset from keras. We have taken the number of unique words in our dataset to be 10000 and we have stored this dataset into 4 variables. XT, YT contains the training data, and Xt, Yt contains the testing data. We will now explore this dataset a bit before creating our model.

Before that let us see what is the first sentence.

? this film was just brilliant casting location scenery story direction everyone's really suited the part they played and you could just imagine being there robert ? is an amazing actor and now the same being director ? father came from the same scottish island as myself so i loved the fact there was a real connection with this film the witty remarks throughout the film were great it was just brilliant so much that i bought the film as soon as it was released for ? and would recommend it to everyone to watch and the fly fishing was amazing really cried at the end it was so sad and you know what they say if you cry at a film it must have been good and this definitely was also ? to the two little boy's that played the ? of norman and paul they were just brilliant children are often left out of the ? list i think because the stars that play them all grown up are such a big profile for the whole film but these children are amazing and should be praised for what they have done don't you think the whole story was so lovely because it was true and was someone's life after all that was shared with us all
218

Here we are getting the word_index keras. This is a dictionary that maps each word to its index. In order to see the first sentence of the dataset, we need a dictionary that maps the index to a word. So, using word_idx, we created a variable idx_word, which maps the index to its corresponding word. After that, we are running a loop on the first sentence which is XT[0] and we are getting the words for every index and storing it in a variable named actual_review.

Now that we have visualized the first sentence, let us make every sentence of equal length. For this, we will use the pad_sequences function in keras.

Now let us create our model.

Our model is now created.

In the RNN layer, we have 32 RNN cells. We can keep this any number we want.

Now let us train our model and evaluate it.

Here we are training our model using the 'rmsprop' optimizer and we are evaluating it using the test dataset. We can see that our model achieved an accuracy of 83.25%.