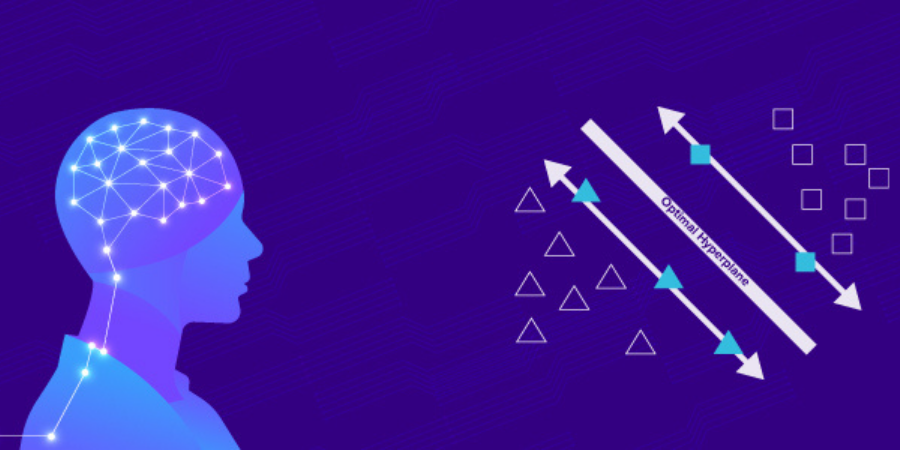 Support Vector Machine or SVM is a popular supervised machine learning algorithm introduced by Vladimir Vapnik and his colleagues in the late '90s. SVMs are considered to be one of the most robust prediction techniques, which is based on statistical analysis. SVMs can be used for both classification and classification tasks. In the SVM algorithm, we plot each training example (having n features) as a point in an n-1 dimensional hyperplane wherein each feature acts as a value for a particular coordinate. SVM works well for both linearly and nonlinearly separable data. The optimum hyperplane is found using the help of support vectors.

There are many applications of SVM. One of them is the Facial Expression classifier. Using SVM we can make a classifier that can detect whether a person is happy or sad by training on such images. Here, all the images will be converted to features and our SVM model would train on those images to classify happy and sad images.


Comparison of SVM with other machine learning algorithms

The difference between the SVM and the Naïve Bayes classifier is from a features point of view. Naïve Bayes treats every feature as independent, whereas SVM sees the interaction between the features to some degree with the help of non-linear kernels (Gaussian, RBF, Poly, etc.). Since SVMs kernels can handle non-linearities in the data, they perform better than Naïve Bayes.

SVM takes care of outliers better than KNN. If there are a large number of features and less training data then SVM is a better classifier.

Let us look at the below figure to get a better understanding of the hyperplane. 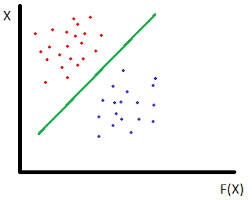 This is a dataset that has 2 classes of data. It has 2 features hence it is plotted on a 2-dimensional plane. To classify between them we need a hyperplane (which in this case is a line) that passes between the two classes. 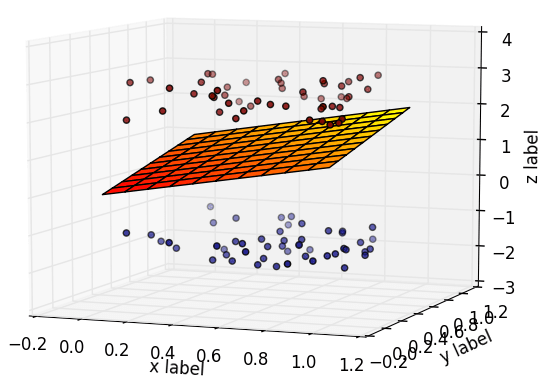 This is a dataset that has 2 classes of data. It has 3 features hence it is plotted on a 3-dimensional plane. To classify between them we need a hyperplane (which in this case is a plane) that passes between the two classes.

Hyperplanes with 3 or more dimensions are difficult to portray or visualize.

A dataset is said to be linearly separable if we can draw a straight hyperplane to classify the classes and a dataset where the classes can not separate by a straight line is referred to as non-linear data. 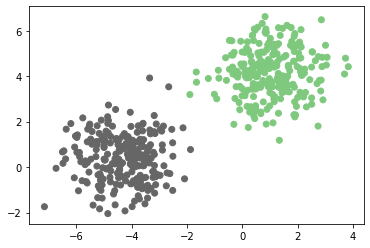 This is linearly separable data as it can be separated using a linear hyperplane (in this case a line). 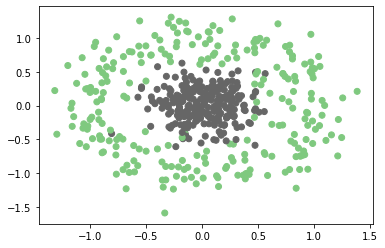 This is non-linearly separable data and we can not draw a linear hyperplane to classify these points. In this case, our hyperplane needs to be a circle.

The goal in SVM is to find the maximum margin hyperplane. It means we have to find a hyperplane, which is farthest from the closest points of both the classes. 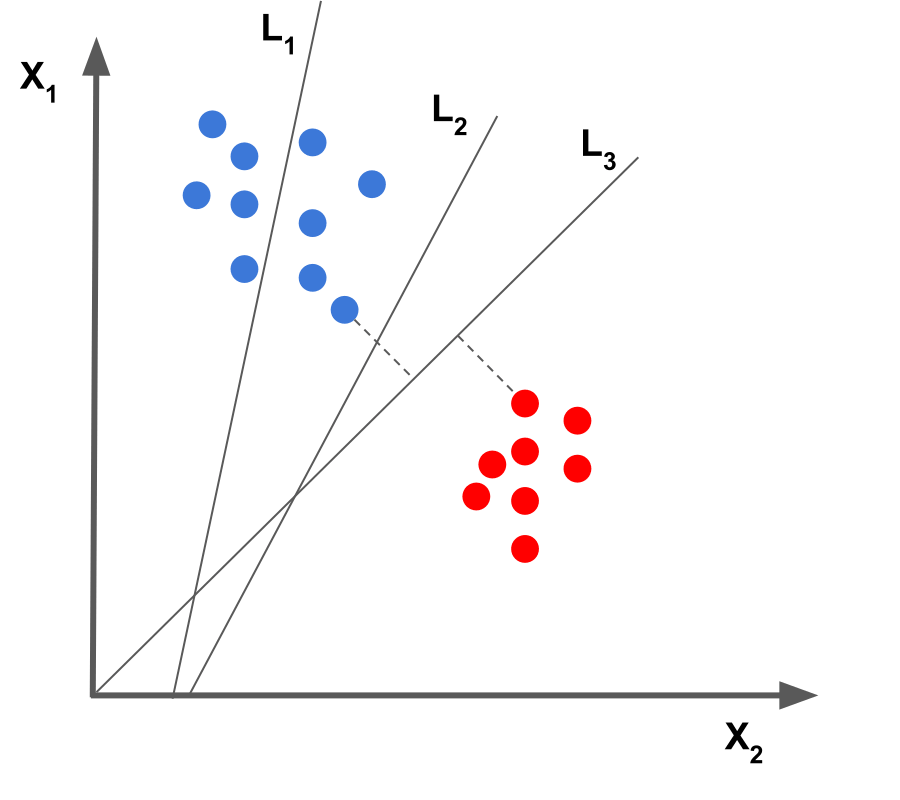 In this figure, line 3 is the maximum margin hyperplane as it is farthest from the support vectors of both the classes.

We want our predictions to be confident and correct.Meaning of confidence can be understood from below example.

One of the main advantages that make SVM stand out from other classifiers is that the different kernels it offers. Kernels allow us to project our n-dimensional data on a higher feature space while still operating on the n-dimensional feature space. It means that with the help of kernels we can project 2d data to 3 or more dimensions which makes it easier for the classifier to find an optimum hyperplane, particularly for non-linearly separable data.

Below are the list of some of the kernels that SVM has:

Now let us look at the svm classifier in sklearn.

We have to start by importing the dataset, and this can be in the form of a CSV file, excel sheet, or even text file. In this example, we are creating a dummy dataset using the sklearn make_classification method. 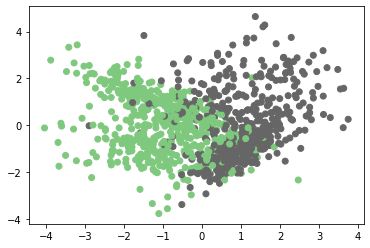 Now we make a SVM classifier.

Our model is now trained.

Now we will test our classifier.

The classifier is predicting that it belongs to 0th class and we can also visualise this prediction. 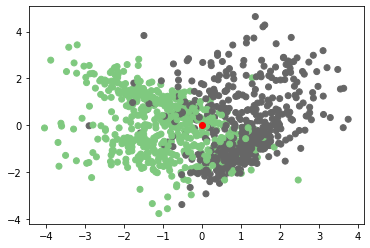 After we have made a base model we can start improving our accuracy using hyperparameter tuning.


Parameters inside SVM of SKLearn

We will start by importing all the libraries we need for this project.

Using the above code we have imported all the libraries that we needed. Now we will import our data which is available in .csv format and store it in a Pandas dataframe.

Let us now display the type of columns present in our dataset.

From the output we have the following observations:

We will now move our target variable in a separate variable.

We have now moved our target variable i.e, status, in a separate variable 'y' and we have dropped the status variable from our dataframe.

Now we will find the correlation matrix and will plot the heatmap to see the relationship between variables. 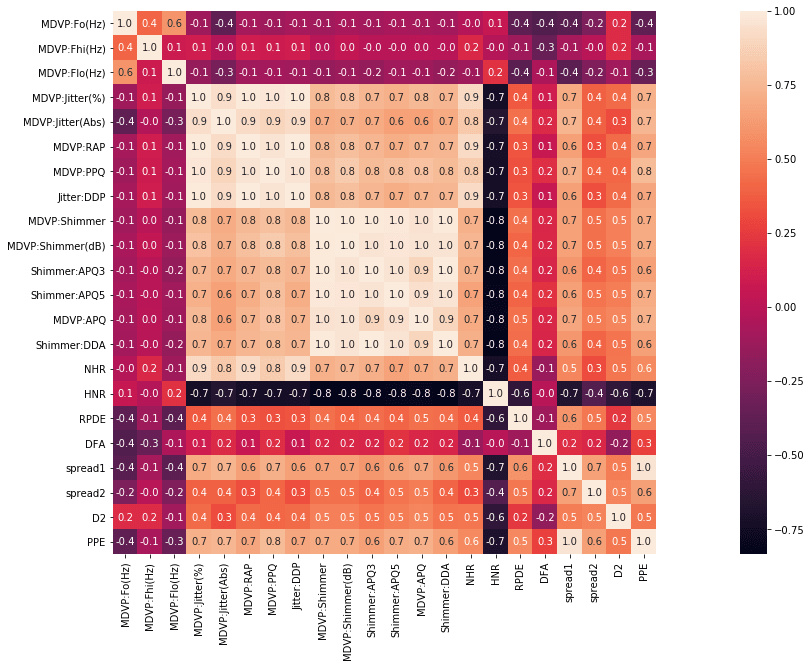 The blocks that are shaded lighter mean that they have higher degree of relation.

We will now split our data into training and test sets.

The next step is to create a SVM model and train our data.

As we can see our model is now trained with C=1.0 and kernel='rbf'

Now we have to test our model.

Now we will find the best hyperparameters using GridSearchCV.

Using GridSearchCV we have found the best parameters for our SVM model.As we can see the best accuracy is achieved when we have C=0.5 and kernel='linear'.So, now let us make another SVM object with the above parameters.

As we can see that our model is now trained after hyperparameter tuning. As calculated by GridSearchCV we have used C=0.5 and kernel='linear'.

Now we will test our model and see if our accuracy has improved or not.

As we can see that using the Hyperparameters as found by GridSearchCV we were able to increase our accuracy from 78.46% to 84.61%.

In this article, we have studied the working of an SVM classifier. We saw its comparison with some other popular machine learning algorithms. We learned how to create and plot linearly and non-linearly separable data using sklearn. We learned about different kernels in SVM. Finally, we made an SVM model which can detect whether a person has Parkinson's disease or not, in which we learned how to use GridSearchCV to find the best hyperparameter for our SVM classifier.